Over 9,000 objects are in the extensive Van Diepen collection. In that, the proportion of the so-called snuff bottles is relatively limited, but there are about 160. But it is important to know what the background of these colorful bottles coming from China is.

What are snuff bottles?

In the 17th century, tobacco sniffing came into fashion with rich Chinese, introduced from Europe. Smoking tobacco was then forbidden, but finely ground tobacco was allowed. It was applied as a medication, it would help with colds, headaches, stomach problems and many other diseases.

The use first focused around the Beijing Imperial Court, but gradually spread over the elite of China. The beginning of the Quing Dynasty in 1644 was the start of a very productive period for the studios in which the snuff bottles were made.

How was the snuff bottle used?

The finely ground tobacco was stored in a small snuff bottle, sealed with a stopper. There was an ivory spoon with which the “snuff” was picked up and then sneaked up. The snuffles were made of all possible materials, such as glass, porcelain, jade, ivory, coral, rock crystal, silver, copper and lacquer. The popularity of the tobacco sniff grew explosively and a large production of the often well-executed bottles was created. The workshops aimed for ever more beautiful and costly designs and the snuff bottle became a collective object.

Jan Menze van Diepen (1905-1994) only started collecting snuff bottles at the end of the sixties. However, his focus remained on Chinese and Japanese porcelain. 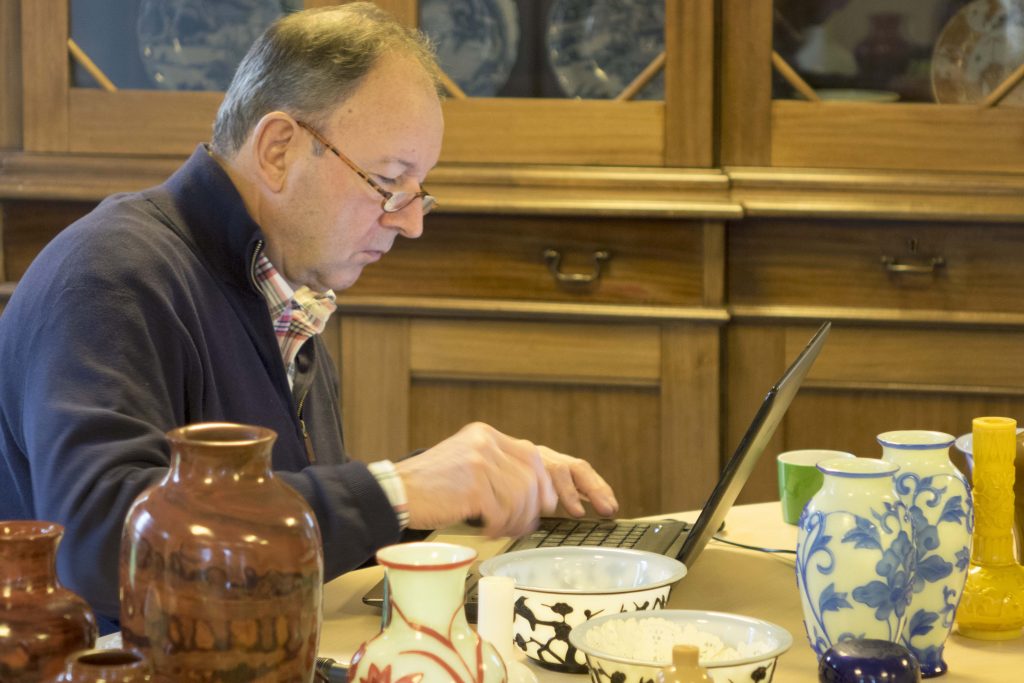 Robert Hall describes the Chinese glass in the collection.

Because there was little known about the 160 snuff bottles in our collection, we contacted Mr. Robert Hall, a worldwide expert in this field. As a result, he came to Slochteren from London for 3 days to review and describe our bottles (and the other Chinese glass). That yielded a lot of knowledge and background information.

Conclusion by Mr. Hall was that our snuff bottles are largely old and authentic, but there are not so many “exciting ones” between them. However, this expert means global top issues. Fortunately, there is the necessary quality in this part of the collection, so we can show you some nice examples in the Fraeylemaborg in Slochteren.