The most important museum of ceramics in the Netherlands, the Princessehof in Leeuwarden, has entirely renewed his permanent Chinese exhibition lately. They have the largest museum collection in this field. After a renovation of about two years, they have drawn a fascinating chronological line through the age-long history of China.

In this arrangement “Topstukken Chinese Keramiek” the museum also included 13 pieces from the collection Van Diepen.

An example is the 16th century pouring-jug in the form of a dancing woman. Of this very rare type comparable specimens are only present in Londen and Tokyo.

Very special are also two plates ornamented with peach- and pomegranate branches in email-colours. These plates (looking peculiar modern) were made in the early 18th century for the Imperial court and are from extraordinary quality.

Also such a special form has the cream-white quadrangle teapot (blanc de chine) from about 1700. “that square form is difficult to make and the result is very clever done” says profs. Jörg about this piece.

The Chinese master pieces in the Princessehof stay there for a longer period. Have a look and search the 13 Van Diepen-pieces! 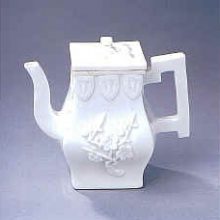