In connection with the preparations for the exhibition “Porcelain with character” (from 25 March 2017 to 22 October 2017) in the Municipality Museum in The Hague, curator Suzanne Lambooy was visiting Slochteren.

During the planned preparations and discussions on Chinese porcelain, our Chinese glass collection, which she did not know existed, was mentioned in passing. To her surprise, this collection was so large in size (approx. 250 objects), that she felt that more people needed to know about this.

She knew that an expert from China in the field of Chinese glass would soon be in the Netherlands and might want to investigate this collection.
Dr. Xue Lu, Associate Professor at the Shanghai Institute of Visual Art and as a researcher at the Shanghai Museum of Glass, spent a short time in the Netherlands and studied the history of glassmaking in China with Western influences, with special attention to the Qing dynasty. She analyses the development of Imperial Glass production from the Kangxi (1662-1722) to the Qianlong period (1736-96), by examining as many specific objects as possible. These objects reveal the influence of western prototypes and connections with sophisticated Chinese artisan shapes and properties.

On Sunday 28 May 28th, Willemijn van Noord, of the University of Amsterdam, glass collector Benita Plesch and Professor Xue with her husband Minggao came to Slochteren. With her tour of Europe she tries to visit as many different collections as possible and, despite her busy schedule, she was very interested in what would appear in our collection.

After a first exploration of the snuff bottles and glass objects, she made a selection of a number of objects and looked at them in more detail. She has told us about a lot of important things about many objects, in which Willemijn van Noord made the necessary notes.
Because she also mastered the techniques of glass blowing herself, she was able to tell a lot about how these objects were made in the past and that often clever simple tricks were used in very complicated decorations. The respect for often lengthy adaptations by the craftsmen of the past was also made visible by her on the basis of various examples. 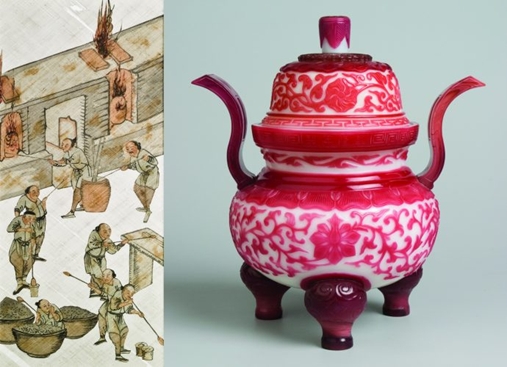 After a very intensive, but also for her very successful afternoon, the trip back to Amsterdam was started and she will include her findings about the collection in her next book.
It was a very interesting, instructive and of course also a very pleasant afternoon, in which the collection has regained new fame and the Jan Menze van Diepen Foundation learned more about this relatively unknown part of the so extensive collection.